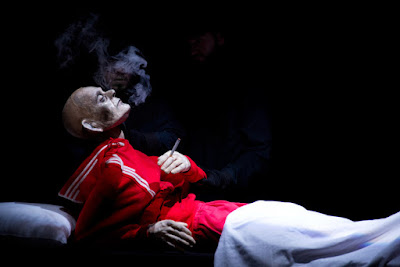 Actors, life-size puppets and video projection come together in this gripping piece of visual theatre, inspired by the true events related in best-selling Norwegian novel, Before I Burn, with an exceptional puppet manipulation. Not to be missed!

MARIA MATOS TEATRO MUNICIPAL
20 and 21 May at 9.30pm (Saturday and Sunday)
Portuguese Premiere 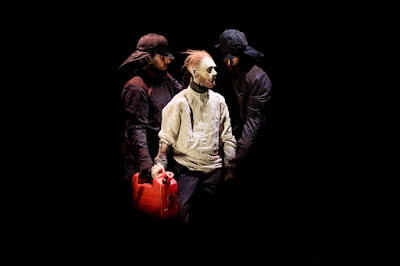 Actors, life-size puppets and video projection come together in this gripping piece of visual theatre, inspired by the true events related in best-selling Norwegian novel, Before I Burn.

Cendres (“Ashes”) is an emotional thriller straddling fiction and reality, equally remarkable and disturbing.
In 1970s Norway, an arsonist targets a small town for one long, terrifying month. As homes are burnt to cinders, panic spreads and neighbours wonder who amongst them could cause such fear and anguish. Years later a young man becomes haunted by the story...

Filled with unforgettable images, the company Plexus Polaire translats the most intimate and hidden feelings, through images and words, of imagination and matter, in an exceptional manipulation.

Yngvild Aspeli takes us into a village in the middle of a forest infested with wild beasts. Swirls of grey smoke, the crackle of flames: the young stage director favours the atmosphere and the sensory dimension in order to tell about sinful states of minds. In an impressionist manner, the actors, the puppets, the music and the shadows conjure up an enigmatic and subtle world. This show offers a sublime dreamlike journey to discover unknown, scary and sometimes overwhelming thoughts.

"Enriched by its atmosphere of mystery and sensuality it shows that we are all on borrowed time, slaves to our emotions and unconscious thoughts. Superb."
- Télérama

"The best shows I saw over a weekend at the Chicago festival did come from other countries. One was the Norwegian director Yngvild Aspeli’s Cendres, a haunted, mesmerizing piece about arson and internal torment, full of life-size puppets and miniature blazing buildings, from the French-Norwegian company Plexus Polaire. Unfortunately for American audiences, it has already headed back to Europe (...)."
- Laura Collins-Hughes, New York Times

"The relationship between puppet and puppeteer is one of endless possibility. With Ashes, French-Norwegian ensemble Plexus Polaire prove they’re experts at exploring the form. This might be one of the most epic puppetry pieces ever seen. Three performers are outnumbered by life-size puppets and a host of smaller counterparts. Add to this the interaction of the one human cast member, lots of projection, a deliciously foreboding soundtrack and some special effects, and Ashes is quite the spectacle (...). The puppetry is exquisite. Operated using the Bunraku method with direct contact from the puppeteers, each one is eerily human (...)."
- Laura Folger, The Upcoming***** 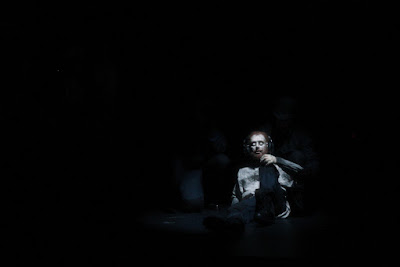 BIO
Plexus Polaire places at the center of their artistic research the relationship between the performer/puppeteer and the puppet, through images and words, sounds and gestures, imagination and substance, giving life to the most deeply buried feelings.
The Norwegian Yngvild Aspeli graduated at École Internationale de Théâtre Jacques Lecoq, Paris, and at École Supérieure Nationale des Arts de la Marionnette de Charleville-Mézières (ESNAM). Yngvild Aspeli is an actress and puppeteer, and makes masks and puppets for different companies in France, Norway and England.
In 2008 she created Plexus Polaire, bringing together a strong team with several years of collaboration, and with new people joining the company, at each new performance. She created three shows within Plexus Polaire: Signaux, Opéra Opaque and Cendres. A new creation is under way, Chambre Noire, a piece about the feminist Valerie Solanas, inspired by Sara Stridsberg's La Faculté des rêves, scheduled to premiere in September 2017.
Since September 2016 she is associated artist at Le Théâtre, scène conventionnée d'Auxerre. Previously, from 2012 to 2015, she was an associate artist at Compagnie Philippe Genty and MCNN, Maison de la Culture de Nevers et de la Nièvre. Yngvild decided to based her company in Nevers, and then in Auxerre, choosing to develop the puppetry art in connection with the Bourgogne-Franche-Comté territory, while continuing permanently on international tours.